Be My Friend is the opening theme song of the Haganai NEXT anime. Same with season one, it was performed by Marina Inoue, Kanae Itō, Nozomi Yamamoto, Misato Fukuen, Kana Hanazawa and Yuka Iguchi. The song was written by Yomi Hirasaka and Hotaru and was composed by Tom-H@ck.

A single titled Boku wa Tomodachi ga Sukunai NEXT OP Single - Be My Friend was released in Japan on February 6, 2013 under the Media Factory label. The single contains four tracks lasting a total of 14 minutes and 14 seconds. These tracks being:

Te wo toreru you ni

Even if you pretend you don't know

I know you've already realized it

I'll try getting closer to you now

It feels like I could even reach your hand

Every day is a roller coaster, wilder than you can imagine

Trying so hard to look straight ahead

That's how I've been running all this time

It feels like something happens, but that's the end

That's how our lives go

This moment is all we have

So let's burn it into our memories

Even if you pretend you don't know

I know you've already realized it

I'll try getting closer to you now

So I can hold your hand

I'm always looking up at you

But even if I want to be more like that

I'll reach out as many times as I need to

It feels like I could even reach that star 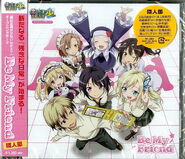 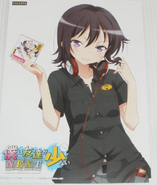 Artwork of Yozora holding the CD.
Add a photo to this gallery
Retrieved from "https://haganai.fandom.com/wiki/Be_My_Friend?oldid=24230"
Community content is available under CC-BY-SA unless otherwise noted.