Boku wa Tomodachi ga Sukunai (僕は友達が少ない, lit. "I Have Few Friends"), also called Bokuha Tomodachiga Sukunai or Haganai for short, is a Japanese light novel series written by Yomi Hirasaka with illustrations by Buriki. It was published by Kadokawa Corporation's Media Factory. Serialization began on August 31, 2009 and ended on August 25, 2015. The series was completed with twelve volumes.

Aside from the source material, several manga and light novel adaptions were released, as well as a two-season-long anime adaptation, two visual novel games and a live-action film.

The original light novel series was written by Yomi Hirasaka and illustrated by Buriki. It began serialization August 31, 2009 by the Japanese publisher Media Factory and was printed by MF Bunko J. Eleven volumes were published in total as of September 2015. Boku wa Tomodachi ga Sukunai CONNECT was released on December 25, 2012 as part of the main set, although it lacked a number.

There are currently three manga series, two spin-off volumes and a short two-chapter crossover special. The first one was written and illustrated by Japanese author Itachi; entitled Boku wa Tomodachi ga Sukunai. Itachi's adaption retains most of the light novel's original storyline and has been published in Media Factory's Monthly Comic Alive since its May 2010 issue. The series currently has 18 volumes. Seven Seas Entertainment has licensed the series in North America under the title Haganai: I Don't Have Many Friends. There are currently 17 volumes published in English.

The other series, called Boku wa tomodachi ga Sukunai + was authored by Misaki Harukawa and illustrated by Shouichi Taguchi. This series was published in Jump SQ.19, from the December 2010 to the July 2012 issues. The series was collected into two volumes, which were published on October 4, 2011, and August 3, 2012. This series serves as an alternate plotline of the original series.

The first season, Boku wa Tomodachi ga Sukunai or simply Haganai, aired between October 7, 2011 and December 23, 2011 after its pilot episode release on September 22 of the same year. This season covers the first, up to chapter two of volume four of the light novels.

The second season, Boku wa Tomodachi ga Sukunai NEXT or Haganai NEXT, aired between January 11, 2013 until March 29, 2013. This season covers the rest of the fourth and the entirety of the eighth volume of the light novel series.

A film adaptation to the series was distributed by Toei and produced by various companies. Yomi Hirasaka, the series' original author, confirmed the existence of the film while, at first, didn't approve of the project as he sees the storyline of Haganai not suited for a live-action film, decided to approve it though having a completely hands-off role in the film's production.

The film was released on February 1, 2014 in Japanese theaters.

The story revolves around a recent transfer student, Kodaka Hasegawa, of St. Chronica's Academy, a Christian high school. In his school, he finds it rather difficult in making friends, as his peers would mistake him as a delinquent due to his appearance, mostly referring to his dirty-blond hair, which he inherited from his deceased English mother, and fierce-looking eyes.

One day, he stumbles upon the loner Yozora Mikazuki, a beautiful yet manipulative classmate of Kodaka's, as she converses with her "air friend" Tomo. Realizing neither of them have any social lives, they decided to form a club - The Neighbor's club (隣人部, Rinjin-bu), which is intended to help them make friends and learn social lives.

Five other members then joined the club, starting with the noble yet arrogant daughter of the school's chairman, Sena Kashiwazaki, who has no female friends due to their jealousy over her many male admirers. The next to join is Yukimura Kusunoki, an underclassman of Kodaka's who rather admires the latter as "he" views him as the "epitome of manliness" and tends to follow in his footsteps in order to become manlier. Maria Takayama, a 10-year-old prodigy who Yozora forcibly recruits as the club's moderator. Rika Shiguma, also an underclassman of Kodaka's and a well-known genius inventor, who is a fujoshi, and an avid fan of yaoi, decides to join the club due to Kodaka saving her from a laboratory accident. Lastly, Kobato Hasegawa, Kodaka's younger sister and a fan of a certain Gothic anime, leading her to imitate one of the show's main character, and decided to join the club due to Kodaka not giving her the proper attention she desires, claiming that she has a brother complex.

As the Neighbor's Club, they engaged in activities which pursues their club's goal whilst facing many trials and tribulations along the way. 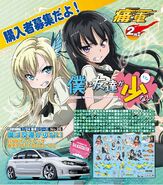 Decals for the model car
Add a photo to this gallery

Retrieved from "https://haganai.fandom.com/wiki/Boku_wa_Tomodachi_ga_Sukunai?oldid=24383"
Community content is available under CC-BY-SA unless otherwise noted.