The live-action movie adaptation of Boku wa Tomodachi ga Sukunai (lit. "I Don't Have Many Friends") - shortened as Haganai is a Japanese movie directed and written by Takuro Oikawa based on the novels by Yomi Hirasaka and its illustrator, Buriki.

On April 24, 2013, Ryukoku University posted a casting call for extras for a 2014 film adaptation of Haganai, to be distributed by Toei and produced by "I Don't Have Many Friends" Production Committee, consisting of Times-In, Kinoshita Group, Pony Canyon, Toei Video Company, Toei itself, Kadokawa, Dwango and Guild. Hirasaka later confirmed the film's existence on May 2, 2013, stating that, whilst he initially didn't approve of the project, as he didn't feel the story was intended for live-action, he decided to approve it in light of a crisis in the light novel industry. Nonetheless, the creator of the original series had a completely hands-off role in the film's production.

The film is 114 minutes in length and was released on February 1, 2014 in Japanese theaters.

Kodaka Hasegawa, a half-British and half-Japanese second-year high school student, is a loner often misjudged by many as a delinquent because of his dirty-blonde hair and tendencies of being involved in trouble. One day, while returning to his classroom to retrieve his cellphone, Kodaka stumbles on his fellow classmate Yozora Mikazuki talking with her 'air friend'. Eventually, the two converses about their loneliness of not having gained any friends and ways of making any. After Kodaka suggests of joining clubs, Yozora hurriedly leaves the classroom.

The next day, Yozora drags Kodaka into an empty room and introduces him to the Neighbor's Club - a club with the goal of learning the ways friend-making - with the two of them being its first and founding members. After releasing cryptic posters in the hopes of gaining members, Sena Kashiwazaki - their school's idol despised by its female students - approaches the club with direct opposition from Yozora. Nonetheless, Sena becomes the club's first recruited member after she exclaims of wanting friends for herself despite being at odds with Yozora.

Eventually, the Neighbor's Club gains more members with unfortunate backgrounds; Yukimura Kusunoki is a cross-dressing female student who joins the club to serve and learn the 'ways of the man' from her senior, Kodaka. Rika Shiguma is a genius with a perverted mind who then joins the club to get 'in touch' with her rescuer, Kodaka, after the latter saved her from a laboratory accident. Kobato Hasegawa, Kodaka's timid little sister with a delusion of being an ancient vampire. And Maria Takayama, a 10-year old nun who acts as the club's supervisor.

While the Neighbor's Club proceeds with their activities of friend-making - particularly karaoke - student council president Saionji and his lackeys hope to disband and dismiss the Neighbor's Club altogether. In one of the club's activities, Rika invented a virtual reality gaming console and has Kodaka, Yozora, Sena, and Yukimura test out her game, dubbed 'Romancing Saga'. In their gameplay, the players found out that the people in their virtual world tend to approach them and act friendly to the players, much to their surprise and delight. However, after some bugs and glitches plaguing the game, Rika cut their gameplay short.

The following day, the Neighbor's Club found their clubroom seized by the student council and placed all of its appliances and other belongings outside. After realizing Sena's absence and Rika's console missing, the group visits Sena bungalow and found the latter immersed yet paralyzed in Rika's game. Yozora and co. then enters Sena's virtual world to rescue Sena but to no avail and agrees to proceed with doing so again sometime later.

The next day, the group discover their clubroom back in their possession, with all of its appliances and belongings back in place and Sena returning. Knowing something's off, Yozora and Kodaka attend a student's gathering to see Sena being elected as the new student council president, accompanied by Saionji. Afterward, the other members lose their respective homes and are forced to reside in their clubroom. Rika states that the game's virtual world orchestrated by Sena has infused with reality and whoever falls asleep will be trapped in the virtual world forever.

The remaining group then invades their academy and discover Sena being ousted from her position as president and Yozora being manipulated by Saionji. Whilst Rika makes her way the academy's rooftop to shut-off the console to destroy the virtual world, Kodaka rushes off to a sleeping Yozora, guarded by Saionji. As the two exchange fists, Kodaka comes to a realization that Yozora was his treasured childhood friend 'Sora' in the past, who taught him the importance of friendship. However, the young Yozora was devastated after Kodaka's sudden transfer, leading to her being cold and disdainful towards other. After defeating Saionji, Kodaka calls out to Yozora by her former nickname - 'Sora' - and the two proceed to escape from the crumbling world after Rika successfully destroys the console.

The group returns back in their clubroom and found themselves back in the day they were testing Rika's virtual gaming console for the first time. Rika explains that they were playing for some time until she had to force-reset the console due to some bugs, much to the group's relief.

Later on, as the Neighbor's Club hold a picnic outside, Saionji comes to interfere to badmouth the group. As Kodaka's tries to hold off from attacking Saionji, Yozora proceeds to knock out the cold-hearted president.

The Neighbor's Club in live-action

Koji Seto as the dirty-blonde Kodaka

Kie Katano as the sharp-tongued Yozora

Mio Otani as the beautiful yet arrogant Sena 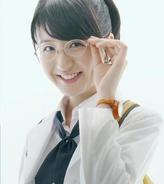 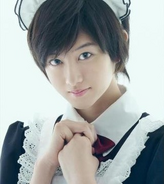 Sara Takatsuki as the maid Yukimura 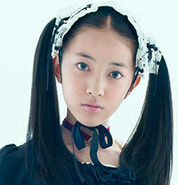 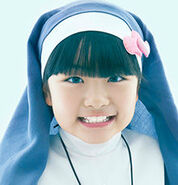 Momoka Yamada as the naive and gluttonous nun Maria

Film fliers
Add a photo to this gallery

Retrieved from "https://haganai.fandom.com/wiki/Boku_wa_Tomodachi_ga_Sukunai_(live-action_movie)?oldid=23604"
Community content is available under CC-BY-SA unless otherwise noted.