The animated media adapted from the light novel series was announced on a wraparound jacket bundled with the release of the sixth light novel volume. On September 22, 2011, a prologue episode was bundled and released alongside the special edition of light novel volume seven.

The season was based on the first three volumes and up to chapter two of volume four.

On July 29, 2012, the official Twitter account of the anime announced that a second season of the series has been green-lit for production and would air in January 2013.

The season's opening theme is "Be My Friend" whilst the ending theme is "Our Wings" (僕らの翼, Bokura no Tsubasa). Both theme songs share the same performers as their first season counterpart - Marina Inoue, Kanae Itō, Nozomi Yamamoto, Misato Fukuen, Kana Hanazawa, and Yuka Iguchi.

The season was composed of twelve episodes, which were based on volumes four through eight of the light novel series.

On September 26, 2012, an OVA mostly based on the ninth chapter of the second volume was released. It features an original ending theme song entitled "You Are My Friend" (君は友達, Kimi wa Tomodachi) performed by Marina Inoue, Kanae Itō, Nozomi Yamamoto, Misato Fukuen, Kana Hanazawa, Yuka Iguchi and Ryōhei Kimura. 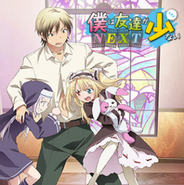 Artwork
Add a photo to this gallery

Back cover
Add a photo to this gallery

Add a photo to this gallery

Retrieved from "https://haganai.fandom.com/wiki/Boku_wa_Tomodachi_ga_Sukunai_Animation?oldid=24708"
Community content is available under CC-BY-SA unless otherwise noted.