A Novel Relay Isn't An Odd Finale (リレー小説は結末が半端ない L（゜□゜）」, Rirē Shōsetsu wa Ketsumatsu ga Hanpanai) is the OVA for the Boku wa Tomodachi ga Sukunai anime series. A limited edition copy of the ova was released as a boxset.

As Kodaka remarks about the laid-back atmosphere in the club-room, he suggests that they (the Neighbor's Club) should engage on a relay novel and the others happily participate. After explaining the rules, the Neighbor's Club made an order of whom should write the novel from start to finish. The first to write were Yukimura, followed by Yozora, Kodaka, Sena, Kobato, Maria, and lastly, Rika.

On Yukimura, "he" writes a story that revolves around a samurai named Kodaka. Who is strong and is well-loved by the people. One day, Kodaka plans to visit a village to rape as usual. Upon hearing, the real-world Kodaka instantly retorted as Yukimura claims that Kodaka rapes a hundred girls a day as told to "him" by Yozora, much to Kodaka's dismay. Continuing the story; during winter, when Kodaka came to wear his sandals, he was surprised to know that his sandals were warm. Angered by this, Kodaka summons his sandal-bearer, Yukimura, and angrily asked "him" if "he" sat on his sandals whilst calling "him" an insolent fool. Yukimura gave his master a nay answer, and claims that "he" held his master's sandals on "his" chest. After showing "his" chest, which were shown to have sandal marks on it, Kodaka praised Yukimura for "his" actions and told "him" to continue "his" service to him, and Yukimura deeply bowed in agreement. Thus, Yukimura swore eternal devotion to Kodaka and they lived happily forever after.

Kodaka then points out to Yukimura that since they're doing a relay novel, it can't be finished with the first writer. Yukimura apologizes as Kodaka then points out that Yukimura's story is a copy of the story of Toyotomi Hideyoshi, Oda Nobunaga's sandal-bearer. Rika immediately then states that Kodaka's forgotten about the most important insertion point of Yukimura's story, which was the part where Yukimura showed "his" chest to him. Claiming that the both of them are male, Rika, aroused, asked Kodaka if he ever made sexual intercourse with Yukimura, causing Kodaka to immediately retort back, saying they hadn't but Rika claims that homosexuality is normal for a samurai but Kodaka, again, retorts as he is not a samurai. Yukimura then claims that "he" allows Kodaka to do anything he wishes to do with "him" if he ever so desired, causing Rika to become more excited, claiming she has to turn her feelings in her chest into written material and asks Yozora to switch places with her in the relay novel. Yozora denied as she was feeling disgust for Rika and the latter instead sat down and imagines about her material for the novel until her turn comes.

It was now Yozora's turn for the relay novel. Continuing Yukimura's story, Kodaka went to a town with his underling, Yukimura, and finds a woman being raped by several thugs. The woman is described to be the real-world Sena according to Yozora's snide remarks about her, and, to add insult to injury, Yozora's name for the woman being raped was Sena Kashiwazaki, much to the real-world Sena's annoyance. But Yozora states that it's only someone else with the same name and tells Sena to know the difference between reality and fiction while addressing Sena in her full name, which Sena's claims to be the first time Yozora addresses her by name. Continuing Yozora's story, as Sena begged for Kodaka to help her, Kodaka instead abandoned Sena as he claims that he only has interest to little girls, causing the real-world Sena to turn over to the real-world Kodaka and asked why he didn't rescue her as Kodaka asks Yozora why she keeps adding weird traits to his character and Yozora claims that it's only her work of fiction.

In Kodaka's turn, he wrote that his character, Kodaka, pretended to leave Sena in her demise and immediately defeated the thugs who were raping her. The real-world Sena thanked Kodaka for saving her character, as Kodaka states that he would feel bad if he hadn't. Continuing his story, after interrogating the thugs, they told Kodaka on the whereabouts of their hideout and plans to go there to slay the villains to bring peace to the village all the while claiming that he has no intention in raping someone and that he isn't only interested on little girls and states that it was only his plan to deceive the villains. After defeating the villains in their hideout, the people then saw Kodaka as young man with a strong sense of justice with a kind heart who cannot leave those who are in trouble to suffer.

Afterward, the Neighbor's Club praised Kodaka for his portrayal of his character in the story.

Yozora: "I guess projecting yourself onto the main character and escaping from the pain of reality is one way to enjoy a story."

Kodaka: "What's that supposed to mean?"

In Sena's turn, she wrote that Kodaka then faces villain's boss, Yozora Mikazuki, causing the real world-Yozora to smack Sena with her flyswatter. Continuing the story, seeing Yozora's power near-worthless, Kodaka still finds himself in a bind after falling for a trap from seeing a galgame. As Kodaka was trapped, Sena Kashiwazaki, God, appeared, as the real-world Kodaka reminds Sena that they're in a cave but the latter tells Kodaka to leave the minor details aside. In the story, Sena claims that being raped by men was only her test for humanity and states that she should have defeated them easily and zapped Yozora, as the real-world Yozora hit Sena wih her flyswatter. As Yozora lies defeated, she begged Sena to spare her and afterward, licked her foot as an act of forgiveness. Sena then narrates that after being slobbered by Yozora at her foot, Sena stepped at Kodaka as her reward for him and then put her foot in his mouth as Kodaka shone his face in ecstasy causing the real-world Yozora to hit Sena with her flyswatter and the real-world Kodaka to snark back at her. Seeing it as an insult, Yozora ordered Sena to apologize to her, and as she did, Yozora sensed no sincerity on her apology and showed her foot towards Sena. As Sena kneels down, she immediately grabbed Yozora's flyswatter and used it to hit the latter, claiming she won't lick her shoes and left the clubroom while flinging insults at Yozora.

Kobato: "The time has come for the fools to catch a glimpse of my infinite genius."

In Kobato's turn, Sena immediately returned to the club-room, ignoring Yozora's insult towards her. Continuing Sena's story, as Kodaka kisses the goddess' foot, he was awakened by the darkness within him by Reisis V. Felicity Sumeragi, as he carried his true alias, Rouga Veiheim Zeiris, which Kobato claims as Kodaka's real name. Reisis and Rouga then reminisced on their first meeting which dated back in the 13th century at Transylvania.

Kobato: "KuKuKu... No son of man could ever understand. The quivering sensation of two souls in resonance."

As Rouga wanders in a forest, riding his steed, he founds a maiden bathing herself. The maiden's name was Reisis V. Felicity Sumeragi whose eyes shone in discrepant colors. As their gazes intersect, a love that is forbidden were developed between the two which would eventually lead to tragedy.

Yozora: "Suddenly my back feels all itchy..."

Kobato: "KuKuKu... The story of Rouga and me shall continue for another thousand pages."

In Maria's turn, she remarks that Kobato's story is boring after the latter gave her the honor on continuing her saga. Continuing Kobato's story, as Reisis (Kobato) and Rouga (Kodaka) walks in a lush plain, Reisis eventually stepped and was covered by manure, much to Rouga's disgust. Rouga then notes to Reisis that she should have accepted God so that she wouldn't have been involved in her current situation being covered by manure and that they must go visit a church to receive God's blessings. There, as the priest (Yozora) showered holy water over Reisis, she eventually turned to ash, much to Rouga's surprise. But was reassured by the priest that Reisis was now accepted into heaven.

Afterwards, Kobato immediately bit Maria out of anger after Maria agreed on Yozora about the moral of her story. By then, it was Rika's turn for the relay novel.

Kodaka: "How do you plan to tie that all up?"

In Rika's story, continuing much of Kobato's and Maria's story arc; after the despair he experienced of his past life, Kodaka (in robot form), decided to use his awakened powers of darkness to destroy both God and the world, much to the real-world Kodaka's, Sena's, and Yozora's surprise but they were reassured by Rika not to mind the minor details. Resuming Rika's story, she claims that the only one who could stop Kodaka in his rampage was his underling, Yukimura. While confused, this gave Yukimura an opportunity to forcefully remove Kodaka's armor before purging "his" own. Naked, Kodaka took out his "manly, member-like object", and Yukimura attached "his" mouth into it, charging "his" power, causing Kodaka to release an intense burst of desire whilst shouting "Universe!!!". After firing such an intense bolt, Kodaka pumped his "cannon" into Yukimura's rear with no restraint. By letting out a maddened voice, they continued to enjoy each other intensely throughout the night, marking it as an end to the whole story, much to the surprise of others.

Rika: "Hahh! That was quite a raunchy story, even for me!"

Rika then notes that she will go "freshen" herself up in the Science room and Kodaka halted Rika for a moment, and complains about the results of their relay novel, claiming he has no idea on what's going on with their story and its sudden ending. But Rika reassures Kodaka that it's still a happy end as she claims that, in the BL (boy's love) world, a story can be ended with a sex scene and all the problems would fade away, as Sena also claims that it also happens in eroge.

While Kodaka was skeptical on Rika's claim, the latter added that the ending of their story is same as reality, as she states that; as long as there is love, there will be a happy end. Rika then wonders on who will receive Kodaka's love in the end of his story, causing Yozora and Sena to plainly react and blush and Yukimura smiles, as Maria instantly hugs Kodaka, while Kobato attempts to separate her from his brother, much to Kodaka's dismay.

After separating the two, Kodaka claims that before they can have a happy ending, he noted that there is still something they need to accomplish. Yozora and Sena agree as Yozora declares the end of their activity and announces that they will continue to work towards the Neighbor's Club's goal: Making friends.

An announcement for the OVA 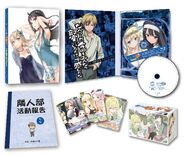 OVA set
Add a photo to this gallery
Retrieved from "https://haganai.fandom.com/wiki/Boku_wa_Tomodachi_ga_Sukunai_OVA?oldid=24250"
Community content is available under CC-BY-SA unless otherwise noted.