Boku wa Tomodachi ga Sukunai Tsutaya CD is a limited edition CD that was released for season one of the Haganai anime series. It was released October 19, 2011. The single consists of a single disc containing two tracks. It was sold by Tsutaya Rental. 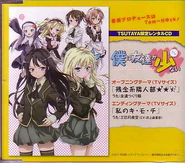 Back cover
Add a photo to this gallery
Retrieved from "https://haganai.fandom.com/wiki/Boku_wa_Tomodachi_ga_Sukunai_Tsutaya_CD?oldid=23810"
Community content is available under CC-BY-SA unless otherwise noted.