On February 28, 2013, these two chapters were released as an eBook.

The Neighbor's Club gets a mysterious message from a certain student council!

The Hekiyou Gakuen student council receives an invitation from the Neighbor's Club to visit. 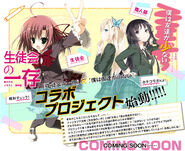 eBook volume cover
Add a photo to this gallery
Retrieved from "https://haganai.fandom.com/wiki/Boku_wa_Tomodachi_ga_Sukunai_x_Seitokai_no_Ichizon_Crossover_Special?oldid=24388"
Community content is available under CC-BY-SA unless otherwise noted.