The Unfortunate King and the Serious Story (残念王と笑えない話, Zannen Ō to Waraenai Hanashi) is the tenth episode of the second season - known as NEXT - and the twenty-third overall episode of the Haganai anime series produced by AIC Build.

The news of Yozora's plagiarism eventually reached the other Neighbor's club members. Yozora embarrassed by this, who was sitting in seiza-style on the floor wearing a placard with a message which signifies her act of plagiarism, and was then being interrogated by Rika herself, in front of her other fellow club members, with a look of disappointment on their faces. Yozora then apologized to the others for her act of plagiarism.

Though Rika was planning on still using Yozora's script for their movie, Sena stops her mid-way, saying she made her own script in the case Yozora ruined their movie, and declaring that they will be using it. As the others praise her, Sena began teasing Yozora for her failure, much to the latter's annoyance, but Sena, looking eye-to-eye at Yozora, told her to redeem herself in their movie afterward.

After shooting some footage for Sena's version of the film, which they found it a total mess, Kodaka came with Rika in her Rika room. Rika then recalled that it was her first time walking with Kodaka in the hallway. When they arrived, Rika showed Kodaka some of the finished footage of their film, causing Kodaka to praise Rika for her work, much to Rika's embarrassment.

Afterward, Kodaka noticed some photo albums by the side and Rika showed him one of them, which includes photos of the Neighbor's club members. Kodaka then mistook Rika as a pervert (as always), but Rika explained to him that the pictures she took were references for the character models of the game they once played, Romancing Saga. At this point, Kodaka realized Rika's effort she puts on her projects and especially, on having friends, and decided to leave the room.

The next day, the Neighbor's club decided on going to the school festival of the middle school division of the academy to watch Kobato at the film their class was making, in which she is also the lead role.

After the film showing, the gang found it to be surprisingly impressive. As they head out, they found Kobato with her classmates, who were praising Kobato for her acting in their movie. Sena eventually hugged Kobato as she saw her, much to Kobato's annoyance. Then one of Kobato's classmates approached Kodaka, saying on how great Kobato's performance is for their movie and revealing to him on Kobato's popularity over her school, but has troubles in getting along with others, much to everyone's surprise, especially Maria, who was looking upset.

Rika then remarked on how related Kodaka and Kobato are in their denseness toward others, though Kodaka pretended he didn't hear anything.

Later that day, back at the club-room, Kobato returns, much to Maria's excitement, who was upset since, and lunged towards Kobato, much to her annoyance. Sena then declared that they should begin on filming again, and telling Kodaka that he was just a stand-in for Kobato in their movie, much to his dismay, but does find relief that, in the club-room at least, Kobato began to get along with Maria.

On the day of the school festival, Hinata Hidaka, the school's student council president, is addressing her opening speech towards her fellow students. After the speech, Kodaka founds Yozora resting by a tree, and comes to tell Kodaka about her dislike to Hinata, due to her popularity, addressing her as "King Lear", specifically, the King of the Normals.

As Yozora walks out, saying she's sick, Kodaka founds Rika at the roof of the school. When she reached him, he notices Rika was wearing bloomers underneath her lab coat, much to his surprise, and after noticing the bags under her eyes, Kodaka thanked Rika for the effort she put in their movie, causing Rika to blush.

Changing the topic, Rika spots Sena racing, and that saying Sena is good at everything, to which Kodaka agrees. Rika then asked Kodaka about her feelings towards Sena and being engaged in all. As a reply, Kodaka retorted, saying they're just club-mates and that they've gone through and moved on with their engagement. Though Rika said that Sena doesn't share his view. Kodaka then pretended that he didn't heard anything, much to Rika's annoyance.

" You don't like being lonely, but you're afraid of people expressing their affections towards you. You pretend not to notice. You pretend not to hear. You run away. You brush off. You cover up. You reject. You even lie to yourself, convincing that no one has any feelings for you. "

Kodaka: " Oh do you mean Kobato? Well, she's always been the shy type. "

Rika: " "What was that?" Don't give me that, you idiot. (acting cold) If you want, I'll continue acting the way I always have. But, Kodaka-senpai... I think it's time you took a step forward. After all-- "

Kodaka then decided leave, and Rika said something but was drowned out by the strong wind, causing Kodaka to ask what was it that she said, pretending not to hear. As he heads down the stairs, he thought that he knew the words that Rika said, and that he knew it for a long time. 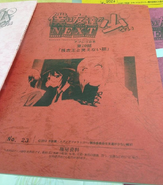 Episode transcript
Add a photo to this gallery
Retrieved from "https://haganai.fandom.com/wiki/NEXT_Episode_10?oldid=24018"
Community content is available under CC-BY-SA unless otherwise noted.