The Regrettable Neighbor's Club Two and a Half Stars (残念系隣人部★★☆, Zannenkei Rinjinbu Hoshi Futatsuhan) is the opening theme song for season one of the Haganai anime. It was performed by Marina Inoue, Kanae Itō, Nozomi Yamamoto, Misato Fukuen, Kana Hanazawa and Yuka Iguchi.

A single titled Boku wa Tomodachi ga Sukunai OP Single - Zannenkei Rijinbu Hoshi Futatsuhan was released in Japan October 26, 2011 under the Media Factory label and consists of a single disc. The disc contains four tracks lasting a total of 15 minutes and 35 seconds. These tracks being:

Tenkai no jirai wo funda!

Weird, I think I'm really into this

I look calm and composed, but I'm really feeling lonely

In my delusions it's bye, bye, bye

But when unfortunates come together

I'm telling you I don't want to regret

Take your cheap pride and

Cut it off, throw it away

If you look at it from the unfortunate

Weird, I think I'm really into this

Cut it off, throw it away

Box set's back cover
Add a photo to this gallery 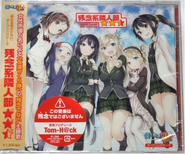 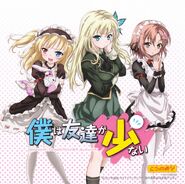 Illustration card
Add a photo to this gallery
Retrieved from "https://haganai.fandom.com/wiki/The_Regrettable_Neighbor%27s_Club_Two_and_a_Half_Stars?oldid=24234"
Community content is available under CC-BY-SA unless otherwise noted.