Video games are exactly as the name implies, video games.

Video games play a large role in the Boku wa Tomodachi ga Sukunai storyline, and as any other reference to the real world (like light novels that are often mentioned on par with games), they are mostly used as tools to create humorous situations, or parody some real-world phenomena (i.e. games or their developers). Almost every character plays them from time to time, whereas Sena is seen playing them constantly.

There are a few real-life games based on the Boku wa Tomodachi ga Sukunai series. These being:

The PSP stands for Play Stati Portable or Play States Portable in the anime. It is a handheld gaming console. They come in various colors though they all have a bubble-styled diamond-shape on the back. Sena has a gold-colored one. Yozora has white and silver-colored one. Kobato has a pink one that Kodaka borrows on occasion. Various other PSP's have been seen in the series being owned by random background characters. On the game case of Boku wa Tomodachi ga Sukunai Portable, Sena is seen holding a red one while Yozora has a blue one. Kodaka has been seen using a black one on a chapter cover.

A game console that Rika won at a shooting game booth at the Tooya Shrine Festival. Rika says that she already has this console and tries to gift it to Kodaka but says that they should put it in the clubroom instead.

Rika assisted in the development of this game console and received a beta version of it. It is a square-shaped white console that comes with many black wired controllers and white eye visors with a green strip across them. These visors were described as being the latest head-mounted display from "Largehead Corporation". Rika also said that these visors may go on sale at some point hinting at the possibility of them being cross-console devices. Alongside the prototype console, Rika was also given a demo version of exclusive software that the company plans to release alongside the console. The software being the 3D fantasy RPG, "Romancing Saga 14".

These are two older gaming consoles mentioned by Yozora. They are based on the Super Famicom and the Sega Mega Drive consoles.

Also known as TokiMemo or Sparkling School Life (in English), is a gal-game originally played by Sena in volume 2. The game is presented from the perspective of a high school boy who wants to conquer hearts of his school's beauties.

The protagonist has stats (intelligence, sports etc) which at the beginning of the game are low, and must be, on player's choice, upgraded along the way of the game. This influences his overall reputation and popularity in school, but other than that, the most important thing is various relationships with player's targets and other characters. For example, the success of conquering one character may be defined by the player's attitude towards other possible targets, which if it's bad, can lead the player to a bad ending. The game is based on the real-life game series, Tokimeki Memorial.

Shortened as MonKari, it is an RPG game where players form a party to hunt monsters and obtain items. Seen playable on the Play States Portable.

Romancing Saga is an RPG game only playable with Rika's gaming headset. The game features character classes, some albeit peculiar, and - like Monster Hunter - has its players battle with monsters. When Sena asked Rika why it is called "Saga", she said because the company is in the "Saga Prefecture".

A game Sena played in Episode 8. She received a bad ending where a shark killed Mizuki, the main character.

A 18+ game mentioned by Rika in NEXT Episode 2. It has a 2-hour long movie based on it called Homo Game Club ~This Is Our True Fortune~. The series also has an anime series and a fan club.

A series of fighting games based on the in-universe anime, Kurogane no Necromancer. The series consists of at least three installments.

An eroge PC game Sena was seen playing in Episode 3. She mentions that it's currently the most popular bishoujo game. She describes it as being a moving, romantic fantasy adventure game.

Characters
Lucas is the protagonist. He has overcome many great trials and defeated Varnibal, the God of Destruction.

Cecilia the Knight is the heroine of the story who ends up confirming her love with Lucas.

Varnibal is a God of Destruction who was defeated by Lucas.

It's an otomege counterpart of Sparkling School Life. 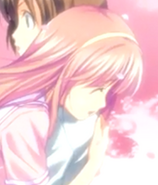 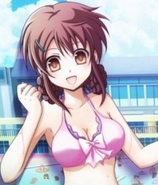 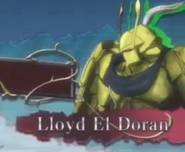 Lloyd El Doran from the Kurogane no Necromancer series.

Holy Knight Carol from the Kurogane no Necromancer series. 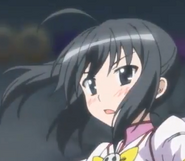 Guernica from the Kurogane no Necromancer series.

Shenhua from the Kurogane no Necromancer series. 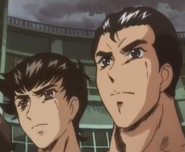 Kobato Hasegawa look-alike from One Day I Suddenly Got A Little Sister With Pigtails And I Can't Take Anymore.

Ouji Sasanomori (or Shinomori in the anime) from Sparkling School Life: Girls Version 4. 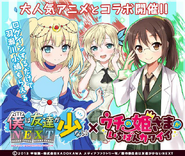 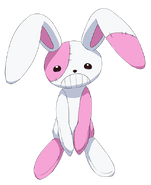 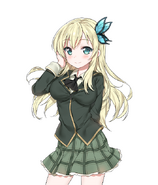 Add a photo to this gallery

Playing States Season One concept art.
Add a photo to this gallery
Retrieved from "https://haganai.fandom.com/wiki/Video_games?oldid=23672"
Community content is available under CC-BY-SA unless otherwise noted.